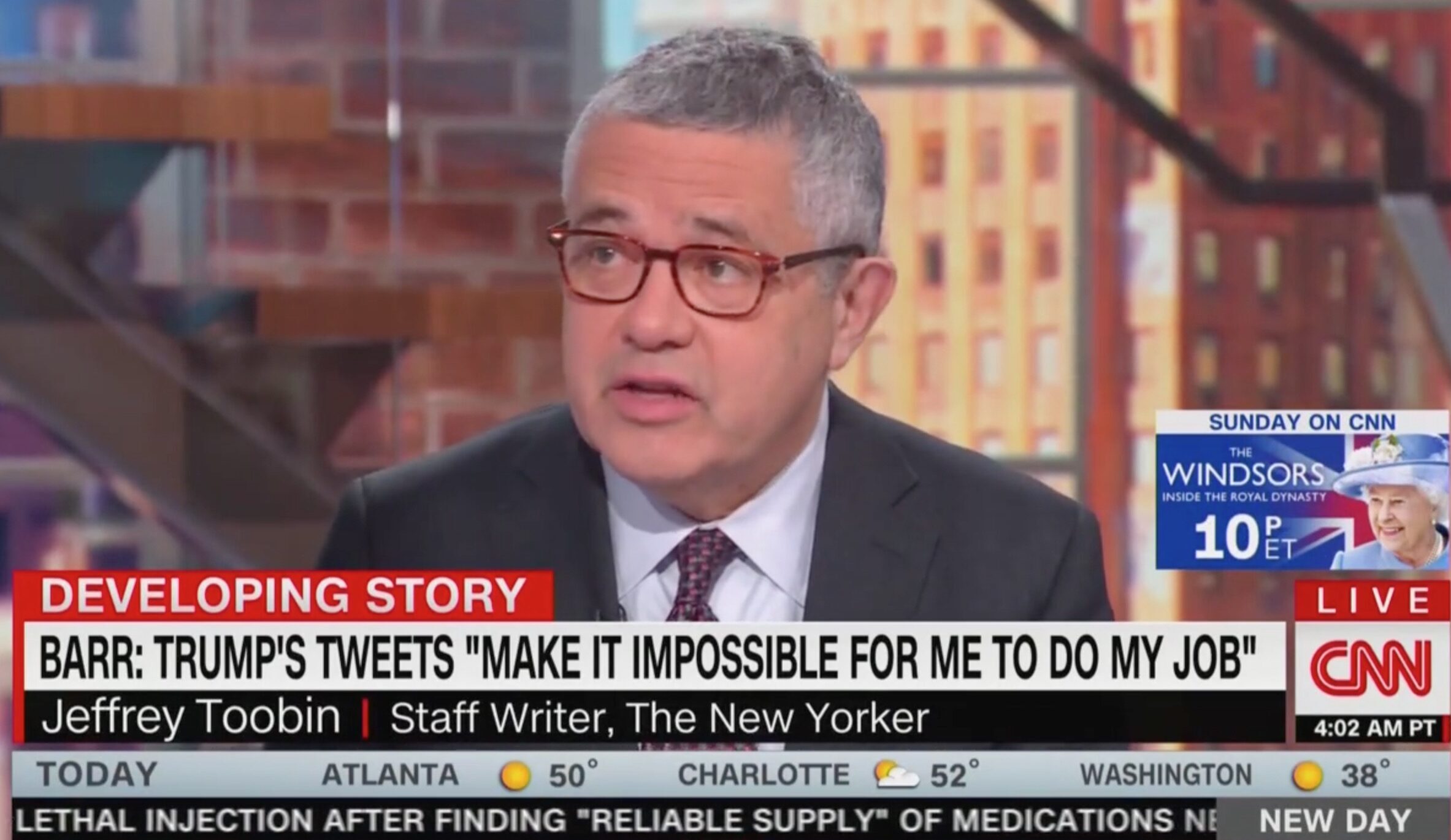 Writer, legal commentator, and accidental Zoom exhibitionist Jeffrey Toobin was partially edited out of HBO series The Undoing, according to a new report, but apparently still has his gig as CNN’s chief legal analyst.

An extensive New York Times report detailing Toobin’s fall from grace – he was fired by the New Yorker after unintentionally exposing himself to colleagues on a Zoom meeting in October – included a slew of new details about the fallout from the incident. One revelation: Toobin was scrubbed from a late-November episode of the highly-popular HBO show The Undoing. His voice, providing “commentary” about the fictional murder trial at the center of the show, remained.

While Toobin is on leave from CNN, he appears to still be employed by the network. Toobin’s CNN profile was still functional as of December 15.

When asked whether Toobin was still on board as chief legal analyst, a CNN spokesperson sent Mediaite the response they issued last month: “Jeff Toobin has asked for some time off while he deals with a personal issue, which we have granted.”

CNN and HBO are both owned by WarnerMedia.

The Times piece detailed the aftermath of the fateful October 15 Zoom meeting, which was an election simulation involving members of The New Yorker and New York’s WNYC radio, where Toobin was also a contributor. Vice first reported on the events of the call four days after it happened. Later that day, The New Yorker confirmed that Toobin had been suspended, and by November 11, he was fired. New York Public Radio, WNYC’s parent organization, told employees that Toobin was banned “indefinitely” from its airwaves and podcasts.

But it’s not all bad news for Toobin. As the Times outlined, Toobin was having a pretty good year, all things considered: his eighth book, about Robert Mueller’s Russia investigation, was getting positive reviews, and the FX series based on his third book, about the Monica Lewinsky scandal, is in production. Toobin has multiple Hollywood projects on his horizon. His verified Twitter account remains intact, although he has posted little more than condolences for friends, and a note that his account was hacked, since October.

The Times story suggests that what happened to Toobin could have happened to anyone, highlighting the “there but for the grace of God go I” response that many people had to Toobin’s actions. The story points to the cover of the December 7 issue of Toobin’s former magazine, The New Yorker, which featured an illustration of a woman who was “crisply attired above the waist; in casual disarray below.” (The Times piece suggested that both were examples of the “fragile boundary between screen and reality,” but it is worth noting that the New Yorker cover is genitalia-free.)

As the Times story pointed out, this isn’t Toobin’s first time dealing with a public scandal. In 2009, while married to his current wife, Toobin had an out-of-wedlock child, followed by a public dispute over paternity, custody, and child support. The Times also shared the story of magazine journalist Lisa DePaulo, who said that in 2003, Toobin left a sexually graphic phone message for her, having asked her out for New Year’s Eve after telling her he was separated from his wife. DePaulo said she thought Toobin was just a “nice guy who was pervy.”

However, many believe Toobin has already paid an unfairly high price. The Times story includes quotes from longtime journalist friend Jonathan Alter, famed magazine editor Tina Brown, author Malcolm Gladwell, and even Masha Gessen, who was on the infamous Zoom call – all of them expressing some degree of sympathy for Toobin. One might suspect a certain CNN boss harbors similar feelings.