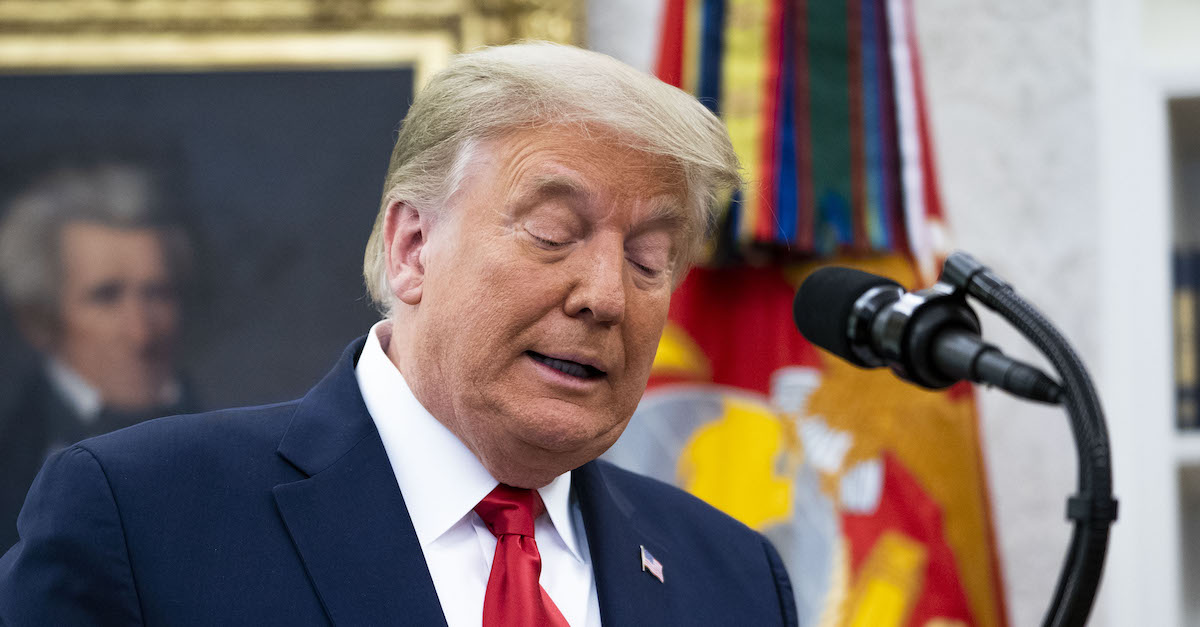 Prominent, die-hard supporters of President Donald Trump lashed out after he signed a pandemic relief bill on Sunday night, averting a government shutdown but caving on a series of last minute demands.

Trump shocked Washington D.C. last week when he refused to sign the $2.3 trillion package. He demanded the the $600 stimulus checks be raised to $2,000 — a number backed by Democrats but rejected by many Republicans — and that foreign aid be cut from the budget.

The delay has already allowed unemployment benefits for millions of Americans to lapse. But by caving and signing the bill Sunday night, the president averted what many feared would be a disastrous government shutdown.

The president was reportedly convinced by Republicans including Sen. Lindsey Graham (R-SC) and House Minority Leader Kevin McCarthy (R-CA) to sign the bill. According to Axios, they fed the president wins he could tout so the signing would not appear to be a complete cave.

In a statement announcing the move, Trump claimed he would be sending the bill back to Congress with red-lined items he wanted to see cut from it. Democrats have already said Trump’s demand for cuts is not going to happen.

A number of prominent MAGA figures — known for their loyal support for Trump — took to Twitter on Monday to decry his signing of the bill as a total capitulation.

“Tonight was the end of any remaining hopes – delusional or otherwise – that Trump would remain in office for a second term,” Mike Cernovich wrote. “He capitulated totally, a pathetic act of weakness leaving a stain on his presidency.”

Some pointed out that Trump has caved on a budget fight before. In 2018, after begrudgingly signing an  omnibus spending bill, he claimed on Twitter: “I will NEVER sign another bill like this again.”

People, Trump was an outstanding president. Outstanding. He was a necessary shock to The System and his presence revealed just how dire our cultural situation is.

But he spent too much money. Way too much. Always did. Four years of it. We can acknowledge both.

Trump enabled big govt. to be more powerful, intrusive, and oppressive when he signed the COVID bill.

It was a disastrous capitulation any way you slice it.

There is no line-item veto

Tonight was the end of any remaining hopes – delusional or otherwise – that Trump would remain in office for a second term.

He capitulated totally, a pathetic act of weakness leaving a stain on his presidency.

I’ve consistently said since 2017 that Trump is weak. Tonight is far from a new song from me. He got rolled every time. By Pelosi. By Mitch. And got election stolen from him. Lol. A joke.

He never learned how to be president and ppl didn’t want to admit it.

What’s wrong with him? For real? Why does he always bark only to fold? Don’t bark and done. Not sure why he yanks his supporters around only to fold every time for 4 years in a row. https://t.co/rPUK1LKm4U

Trump caved in Congress every year.

He ran on cutting bullshit programs.

“Waste fraud and abuse. I am a business man. I can fix it. “

Yet each year the omnibus passed with all the same bullshit. https://t.co/HgxYLfXrAx

My biggest frustration lately with friends also on the Right is, they’re delusional about thinking Trump has leverage. He does not. It’s depressing and infuriating, but whatever control he had over his own government evaporated about a week after Election Day. Wish it was not so. https://t.co/0zE2nMvDJD

The people who believe Trump could do no wrong, Trust the Plan, don’t worry, he’s playing 65D Chess, have done incredible damage: In deciding to be a cheering section only, they gave up any opportunity to influence decisions. Since he’s perfect, he’ll do the right thing anyway.

Raheem Kassam, the editor of National Pulse, could not bring himself to go as far as his fellow MAGA diehards. Instead of arguing that Trump had failed, he blamed Republicans lawmakers for duping the president.

“[If] you want someone to blame, look no further than Congressional Republicans including Kevin McCarthy and Lindsey Graham for misrepresenting the facts to the President over this weekend,” Kassam wrote.