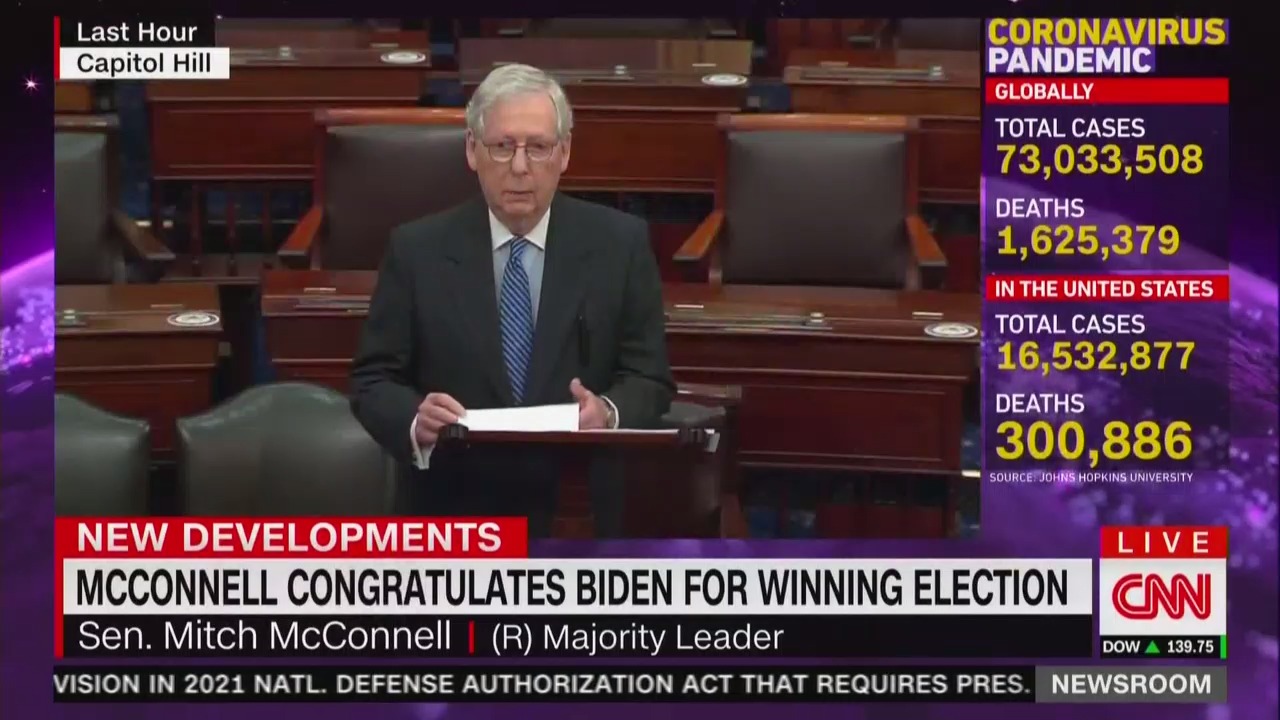 It is Mitch McConnell’s turn in the barrel.

After the Senate Majority Leader congratulated Joe Biden and Kamala Harris on their victory in the 2020 election, recognizing the pair as president-elect and vice president-elect, media supporters of the president attacked the Kentucky Republican for abandoning efforts to overturn the election.

President Donald Trump, his legal team, and his allies in the media have waged a scattershot assault on the results of the election, which saw the incumbent defeated by seven million votes. The attempt to steal the election from Biden — by claiming it was stolen — has been fruitless. It has been rejected by leaders in the Republican Party and failed in the courts.

Still, McConnell pointing out the obvious enraged faithful members of the pro-Trump media.

Mark Levin — the Fox News host and enormously popular radio host who has spread conspiracy theories about the election — said it’s time for the veteran Republican senator to retire.

“You’ve been the GOP ‘leader’ in the Senate for far too long,” Levin tweeted. “It’s time for some fresh thinking and new blood.”

2. Trump helped you secure your seat, as he did so man Senate and House seats, and you couldn’t even wait until January 6th. You’ve been the GOP “leader” in the Senate for far too long. It’s time for some fresh thinking and new blood.https://t.co/ucaa2cmmcQ

Charlie Kirk, the founder of pro-Trump youth group Turning Point USA, criticized McConnell for the tone of his remarks.

“You typically don’t use the term ‘congratulations’ when someone just stole a bank,” Kirk said. (Of course, the election was not stolen, and McConnell knows that, hence the congratulations to Biden, the winner of the election.)

Kirk said that the move from McConnell will not help Republicans in the upcoming Senate runoff elections in Georgia.

If Senate Republicans want to lose the Georgia races and their majority, conceding the presidential election to Joe Biden and congratulating Kamala Harris is a good place to start.

Marjorie Taylor Greene, a conspiracy theorist and congresswoman-elect from Georgia, took a veiled shot at McConnell in a tweet accusing Republicans not fighting for Trump as supporting “the Chinese Communist Party takeover of America.”

Every “Republican” that isn’t fighting for @realDonaldTrump’s 2020 landslide victory is supporting the Chinese Communist Party takeover of America.

Sebastian Gorka, a radio host who served briefly in the Trump administration, accused McConnell of caving to “the mob.”

.@Senatemajldr caves to the mob, refuses to wait for the final January 6th #ElectoralCollege count.

Dinesh D’Souza called the statement from McConnell “a body blow to patriots,” but acknowledged that the Trump campaign has failed to prove their claims in court.

Check Fox Business at 5 p.m. for what promises to be a nuclear episode of Lou Dobbs Tonight.