Instead of broadcasting pre-recorded videos or a livestream to open its Covid season, the New England Philharmonic chose live programming on a small scale. Philadelphia-based composer TJ Cole’s Nightscape had been slated for an October performance with the full forces; in its place, NEP invited Cole to its (virtual) stage.

From her living room, Cole engaged in an hour-long discussion co-hosted with the Boston New Music Festival. NEP’s concertmaster Danielle Maddon and composer-in-residence Eric Nathan, familiar to Boston audiences from his past work with the Boston Symphony, served as interlocutors. Between functioning as sonic tour guides for sections of Nightscape and Cole’s recent composition Playtime, all three lent helpful insights and background.

Nathan introduced Nightscape, which understandably took pride of place during the evening. The title is evocative, but through Nathan’s perceptive questions, Cole revealed its particular origin story. She is fond of stargazing and was inspired by memories of watching the constellations circle above the skies in northern Michigan. Indeed, the piece opens with string glissandi moving in contrasting directions from a single pitch, revealing the expanse of the heavens above the stargazer’s head. After several intense minutes of motivic development, Nightscape ends in the opposite way with glissandi merging back together. We listened to the brief sections analyzed by Nathan as well as, eventually, to the entire work. This trade-off between listening and discussing provided a far more thorough presentation than conventional program notes.

Cole’s reaction to Nathan’s and Maddon’s live analysis proved particularly gratifying. A brief, repeated flutter in the woodwinds at the beginning of Nightscape stirred extensive discussion. Maddon heard the twittering of birds settling in for the night while Nathan imagined moonlight reflected in a rippling pond. But Cole disclosed that she considered the motive to be simply the twinkling of the stars above. In an excellent reminder that music can and should mean different things various listeners, Cole gamely enjoyed hearing how her composition stimulated a mix of images. 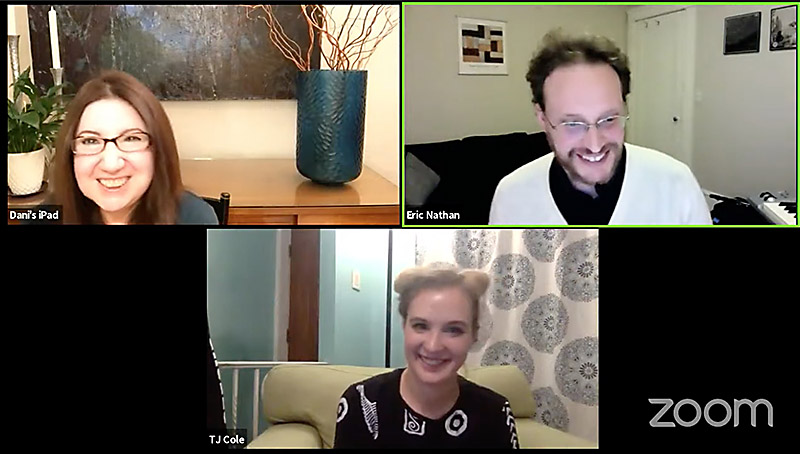 Maddon then walked the audience through selections from Cole’s entertaining Playtime – 10 miniatures for string sextet. We listened to five of the moments, each with charming titles including “Bubble Brite Popcorn” and “Wind-Up Swing Set.” Cole again clearly focused on humor. While at work on Playtime, she compiled a lengthy list of favorite childhood games and toys, paring them together to spark musical ideas. Each movement differs dramatically, reflecting the variety of amusements on offer.

Playtime’s highly descriptive titles made for greater interpretative consensus. But, for example, Cole was still delighted to hear Maddon’s idea that the climax of the first movement, “Rainbow Train Tag,” represented the literal “tag,” or the moment when other trains caught up with the first. The evening ended with a few audience questions, which Cole sportingly answered. These made the event feel more intimate and we all benefited from her open and frank answers. How else would we have learnt that she plays in a synthpop band or that she composes primarily using the violin, an instrument she freely admits that she doesn’t play well?

Throughout the conversation, both Maddon and Nathan provided fascinating perspectives. Maddon spoke to the potential difficulties of Cole’s string writing and addressed specific issues of instrumental technique. Meanwhile Nathan offered compositional insights, sometimes matching Cole’s experience, while occasionally and intriguingly contrasting his own background. He also successfully used Zoom’s potential as a multi-media tool, allowing viewers to see portions of Cole’s scores, with Nathan underscoring his analysis via carefully delineated markings on the “page” in a clever use of the whiteboard feature.

One might have wished for original recordings of the works, particularly for a smaller-scale piece like Playtime (we instead listened to excerpts from versions previously available online), but it’s hard to fault the NEP for excess caution during a pandemic. After NEP’s first virtual event, I look forward to the rest.

The discussion is permanently archived HERE. One can hear more of Cole’s music, including the full versions of Nightscape and Playtime HERE.

Gareth Cordery, a first-year Ph.D. student in Historical Musicology at Columbia University under Walter Frisch, majored in Music and History Middlebury College. He has performed piano concertos with symphonies across the United States, and lives in New York City.