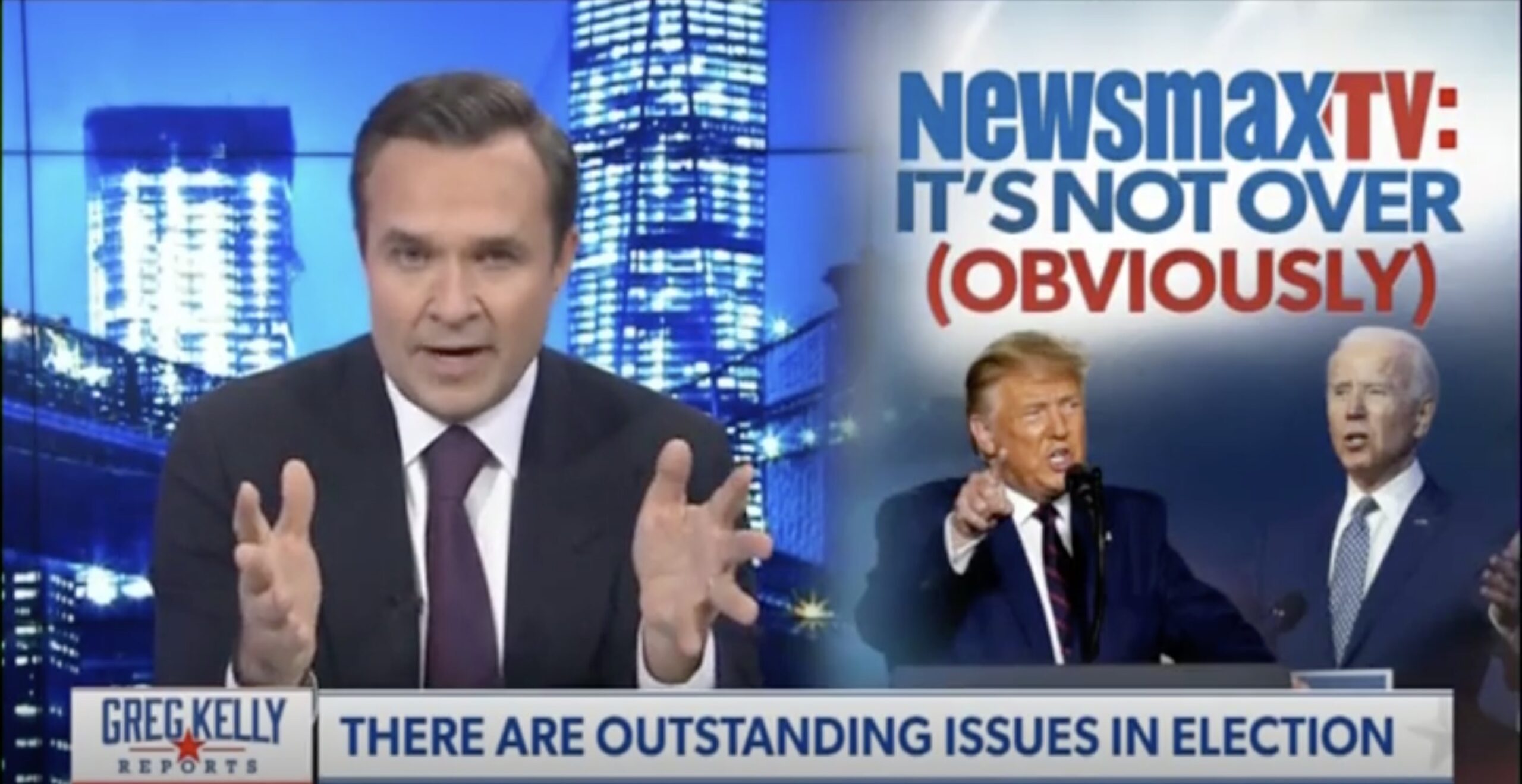 In a Christmas Eve show, Kelly re-ran Trump’s call-in interview from October 14. Once he was back live, Kelly said: “Another reason why I’m pulling for him to prevail in this struggle — Joe Biden’s never going to call into this show, hm? All right, I’m pulling for you, Mr. President.”

In reality, Trump has not prevailed, and he is not likely to. Trump’s legal team has lost more than 50 legal challenges to the election results, including in the Supreme Court. Some GOP lawmakers have vowed to contest the formal counting of the votes on Jan. 6, but Senate Majority Leader Mitch McConnell has discouraged contesting Biden’s win, and has already acknowledged Biden and Harris as the winners. Senate Majority Whip John Thune (R-SD) said that any attempts to challenge the votes are “just not going anywhere. It’s going down like a shot dog.”

Even Newsmax itself accepted the results of the election following the electoral college certification.

Kelly, however, has not, and he is even more outspoken on Twitter. He often refers to Trump’s “Term 2,” and has even made suggestions for possible cabinet members.

This is fightable. This is winnable.

The Cabinet Room. In Term 2–no more “coaxing” anyone out of “retirement.” Every “SECRETARY” who needed to be “wooed” into Government is a Disaster. Either you Want to Serve or you don’t. You either you have the skills or not. If you “don’t want to be here” we don’t want you! pic.twitter.com/DwMDYRPwyj

Damn STRAIGHT. We need TRUMP. NO ONE ELSE would ever, could ever, stand up to the CORRUPT SWAMP like TRUMP. FOUR MORE YEARS. NOT OVER. https://t.co/5FjieimZuB

Newsmax TV was founded in 2014 by Chris Ruddy, a longtime Trump friend and ally. The conservative network is increasingly seen as an alternative to Fox News, which some Trump supporters apparently feel is not pro-Trump enough – despite ongoing support from some Fox hosts. Trump himself has tweeted his support for Newsmax multiple times, encouraging viewers to change the channel away from Fox.

Ratings-wise, Newsmax hasn’t been considered much of a player in the cable news landscape, but the network saw significant viewership growth after the presidential election. Between the hours of 4 p.m. and 8 p.m., Newsmax’s viewership increased by 497 percent, while Fox’s viewership in that same time period declined by 38%. In early December, Greg Kelly Reports notched a victory over timeslot competitor The Story With Martha MacCallum on Fox by getting more viewers in the highly coveted 25-54 demographic, although Newsmax has yet to repeat that success.

Greg Kelly Reports has also seen significant growth after the election. Between Nov. 9 and Dec. 17, Kelly’s show saw a 486 percent increase in viewership, while MacCallum’s show declined by 44 percent, although overall viewership numbers still favor Fox over Newsmax — by millions.