“Global shipping companies’ financial performance has been improving as a result,” says Emma Griffith, a senior director at Fitch. “We expect healthy freight rates to continue in the short term, although potential pressures from trade protectionism and resulting localization of supply chains, weak economic recovery, and slipping supply discipline may affect rates in the longer term.”

Consolidation in the global container shipping industry in recent years is the key factor behind improved supply discipline in the sector. The three largest alliances now account for about 80% of the global market. The market participants have maintained low order-book levels of about 10% of the existing global fleet during the current crisis, compared with about 60% in 2007.

The largest companies reduced available shipping capacity by more than 13% last year to meet a 11% decline in global demand, according to Fitch. As a result, freight rates have been growing since mid-year 2020, accelerating in August as demand improved, reaching record levels last October.

A sharp growth in trans-Pacific rates, which almost tripled year-on-year, was the largest contributor to the composite global rates increase. Trans-Pacific rates have benefited from increased volumes since June 2020, driven by re-stocking, increased demand for personal protective equipment, and the growth in inventories ahead of the holiday season to cover potential disruptions. 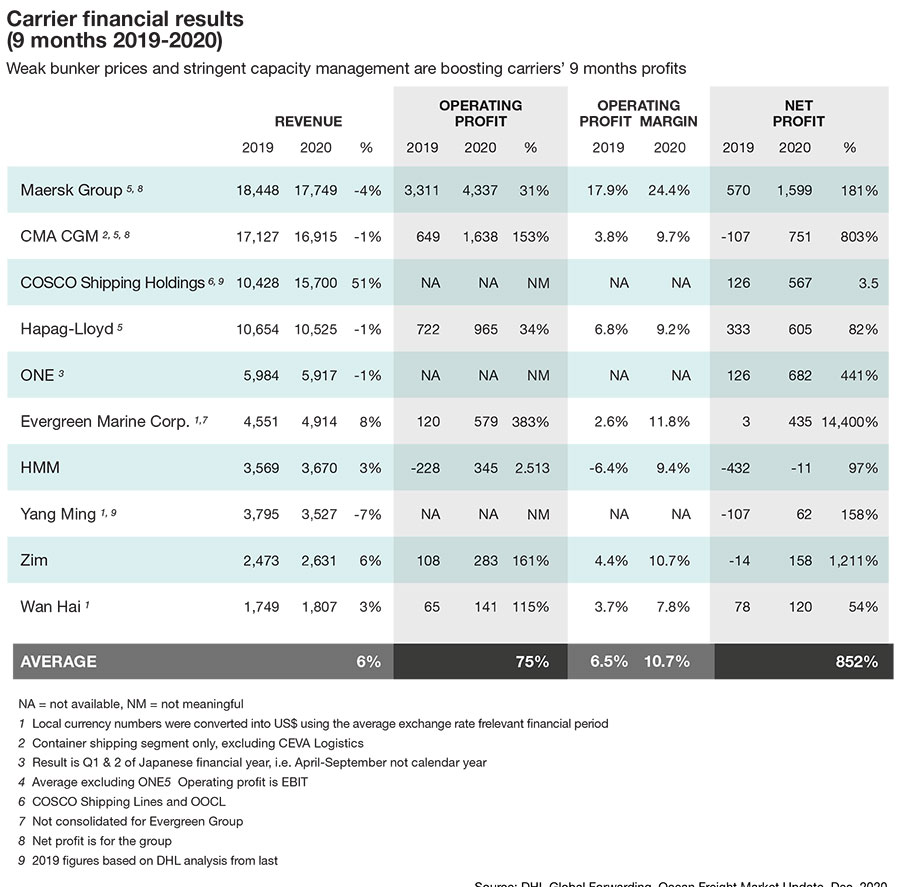 “The industry’s profitability could be one of the highest ever, if container liners continue to maintain capacity discipline, given that order books are fairly small,” says Griffith. “We expect good levels of free cash flow generation this year, which shipping companies are likely to use to reduce debt, which will improve their credit metrics.” 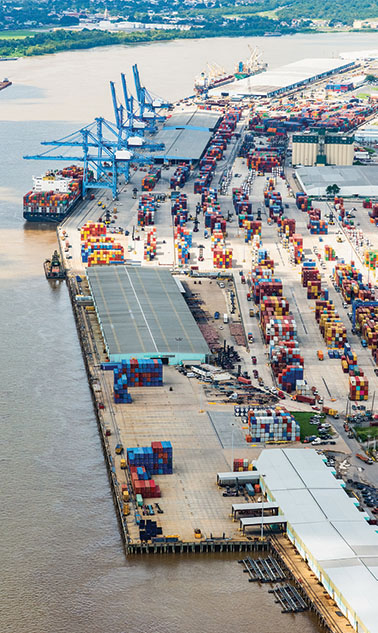 The plan calls for patented new waterway vessels that will move large volumes of goods and commodities along both the Mississippi River and Missouri River and their tributaries, serving key consolidation ports in St. Louis, Mo., and Memphis, Tenn., and several other feeder ports.

This might effectively create an all-water, north-south  trade lane connecting the Midwest to the lower Mississippi River and on to worldwide destinations. Service on the new route could be available to shippers within the next 30 months.

“Recent milestones signal progress for the ambitious plan, which has been in the works for four years,” says Mary Lamie, executive vice president of multi-modal enterprises at Bi-State Development and head of the St. Louis Regional Freightway, one of the entities working to bring the new service to Missouri and the St. Louis region.

Lamie adds that St. Louis has the geographic advantage of being in the center of the U.S. and strategically located on the Mississippi River within a 500-mile radius of 80% of all agriculture production in the U.S. “But it’s the infrastructure and intermodal capabilities we already have in place in Kansas City, Jefferson City and the St. Louis region that are key to providing a new containerized shipping option to reduce freight transportation costs and increase efficiency and reliability for shippers,” Lamie adds.

A key milestone in the effort was reached in August, when American Patriot Holdings and Plaquemines Port Harbor and Terminal District in Louisiana announced that it had signed a letter of intent to develop a multimodal, state-of-the-art container terminal at its facility near the mouth of the Mississippi River, which would accommodate the new vessels delivering the service. The signing of the letter marked the beginning of a significant due diligence process with key strategic partners.

“Our due diligence includes vetting all the components of the new system—the individual upriver ports, the gateway terminal in Plaquemines, and the vessels themselves,” says Sal Litrico, CEO of American Patriot Container Transport, which is developing the new vessels.

Litrico expects that they will complete the due diligence phase in the first quarter of 2021, at which time they and their strategic partners, including potential investors, and will have all the information in hand to make a final investment decision. If everyone signs on the dotted line, the project will then move full-steam ahead.

Jon Monroe, president of ocean cargo focused Monroe Consulting, notes that the container shipping industry has historically been among the most volatile of all global transportation sectors. Despite some recent structural improvements and less aggressive competition, there are still significant downside risks.

“What was holding the 2020 shipping season up?” asks Monroe. “We never expected last year to be this strong. In fact, back in January and February of last year, logistics managers and carriers expressed very cautious expectations.”

According to Monroe, carriers kept contract rates static for the first part of 2020, but when COVID-19 hit the United States, it was a deciding factor in the winners and losers in the retail industry. “If you were an essential retailer, you hit the jackpot,” he says. “Essential retailers included companies like Amazon, Costco, Walmart, Target Stores, Home Depot and Lowes just to name a few.”

Furthermore, says Monroe, essential retailers with an online presence witnessed business going through the roof. Volumes have maintained this upward trend since June. Container exports from Asia to the U.S. continue to remain strong, possibly reflecting a change in buying habits. “As we enter 2021, it looks like more of the same,” he says. “Equipment availability seems to be getting worse rather than better. Carriers are working to rectify this situation, but it will take time.” 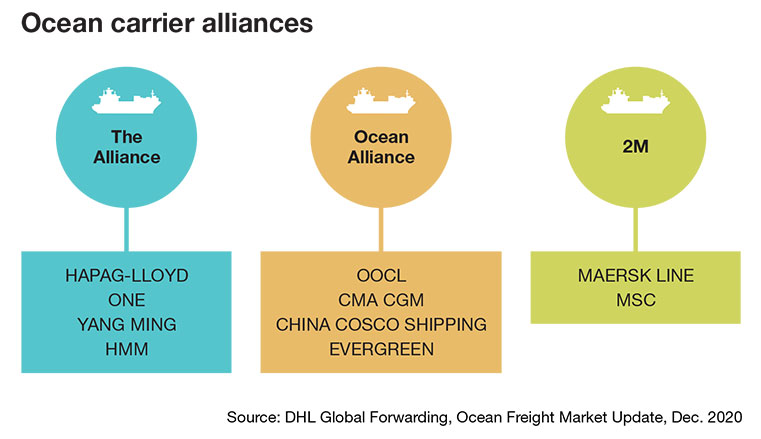 Monroe notes that bookings continue their surge and equipment is scarce. He tells logistics managers to expect more of the same in March. “Carriers are responding by skipping smaller ports, thereby tightening the port rotation loop in order to reposition equipment faster,” he adds. “In North America, carriers are limiting movement to inland locations as well as inland export bookings.”

Meanwhile rates continue their upward movement as demand continues to surge fueled by e-commerce and medical supplies—especially personal protective equipment (PPE). “We are, without a doubt, in one of the strongest bull-markets for the container carriers that we’ve seen in the last few decades, with container rates on many trade lanes setting records week after week,” observes Lars Jensen, CEO of SeaIntelligence Consulting.

But how long this trend will last is a question no one in the industry seems ready to answer. “The container shipping supply chain is comprised of a large number of elements, and presently, virtually every single one of the involved components is finding itself in a state of turmoil,” says Jensen. “Getting the market to a normal level of predictability and performance will take an unknown amount of time.”

The trigger for this level of uncertainty is, of course, the pandemic that has dramatically altered consumer behavior. This impact has not only been both negative and positive in 2020, but it has also shifted with a speed previously not seen.

According to Jensen, the magnitude and speed with which consumer behavior—and hence the impact on the container markets—will change in 2021 is exceedingly difficult to predict given that all modeling of this is brand new territory. “Seeing beyond the immediate issues related to the pandemic, it would be erroneous to believe that once the pandemic is over then the container markets would become stable and predictable,” he adds.

Jensen maintains that there are two key reasons for this. The first is that the container shipping market has always had a relatively high level of unpredictability. Whenever there are large changes in market elements, this tends to draw headlines. But unfortunately, this often also leads to the perception that large changes are an anomaly—a unique and rare event. The reality is that these changes are more frequent than market participants appear to give them credit for.

The second reason is that the structural development in the industry will act to enhance these uncertainties and not necessarily reduce them going forward. “As a consequence, we might well see a gradual market shift—in essence a bifurcation—toward a more volatile spot market on one hand and a more stable contract market governed by enforceable contracts on the other. For shippers who wish to manage their market risk, this will result in a challenge,” says Jensen.

He further notes that even the most structured shippers can’t accurately predict their volume flows up to a year in advance—especially not at a port level as both customer demand, as well as sourcing locations, might change. This, in turn, means that they will be able to secure only the most predictable part of their demand in a strict contractual framework, but be left to the increasing uncertainties of the spot market for the rest. 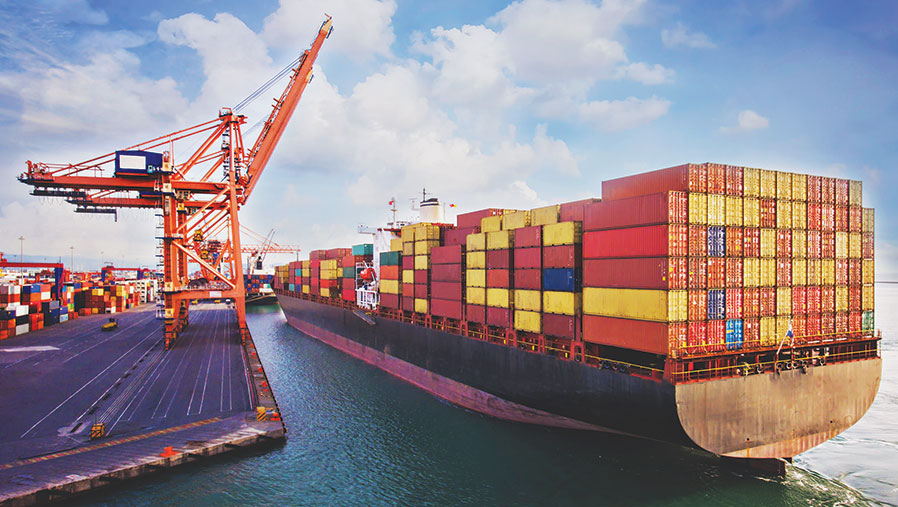