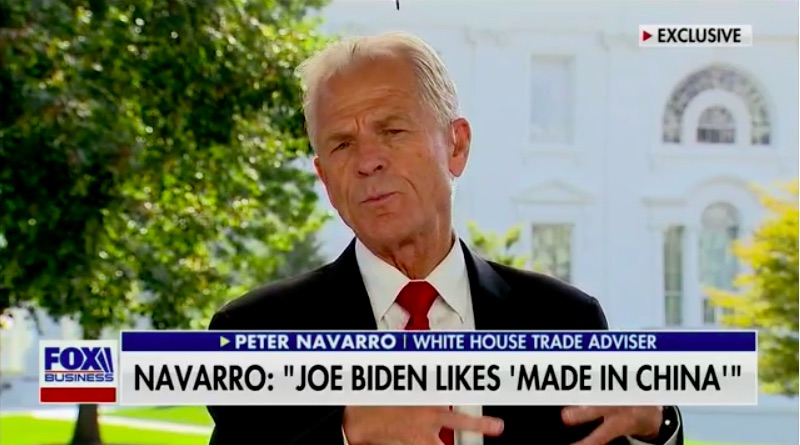 That finding comes from the Office of Special Counsel, which published a report on Monday that concluded Navarro broke the Hatch Act on six different occasions, by openly engaging in political advocacy despite working in a nonpartisan job at taxpayer expense for the White House. The investigation was launched after the Citizens for Responsibility and Ethics in Washington (CREW) lodged a formal complaint about his mixing of campaign activity with his official capacity.

“In an administration full of people illegally using their government positions to influence an election, Navarro has been one of the worst,” CREW Executive Director Noah Bookbinder said in a statement. “We thank OSC for their thorough investigation and finding of Navarro’s repeated wrongdoing.”

The OSC determined that Navarro’s frequent attacks on Biden during at least six separate appearances on MSNBC and the Fox Business Network from May 26 through Oct. 19, 2020.

Dr. Navarro often attacked Mr. Biden about his relationship with China and at times accused him of being “compromised” and susceptible to being “bought” by China, even nicknaming him “Beijing Biden.” Dr. Navarro also argued that a Biden presidency would be devastating to the U.S. economy, and he disparaged vice-presidential candidate Kamala Harris, calling her a mouthpiece who cannot be taken seriously. On his “@PeterNavarro45” Twitter account, which he often used for official purposes, Dr. Navarro engaged in similar partisan attacks, repeating his “Beijing Biden” nickname for Mr. Biden and accusing him of being “soft” on China and a plagiarist. Moreover, Dr. Navarro’s violations of the Hatch Act were knowing and willful. He committed these violations after having received training on the Hatch Act and, for most of the violations, while knowing that OSC was investigating him for engaging in the same prohibited political activity.

Navarro has spent much of the past few months in the lead-up to the 2020 election unapologetically defending Trump by veering out of his lane as an expert on trade policy. Back in July, Navarro, who has no background in public health, wrote a USA Today op-ed attacking the government’s infectious diseases expert, Dr. Anthony Fauci, as “wrong about everything.” He likewise slammed Fauci and promoted the failed Covid-19 off-label-use drug, hydroxychloroquine, which Trump too had pushed as tantamount to a miracle “cure.”

“Navarro’s blatant violations of the Hatch Act are rivaled only by Kellyanne Conway,” Bookbinder said, referring to the former White House counselor, who was also called out by the OSC for violating the law. “This isn’t about not knowing better, it is about a lack of interest in following the law, even when the cost to our democracy is severe.”