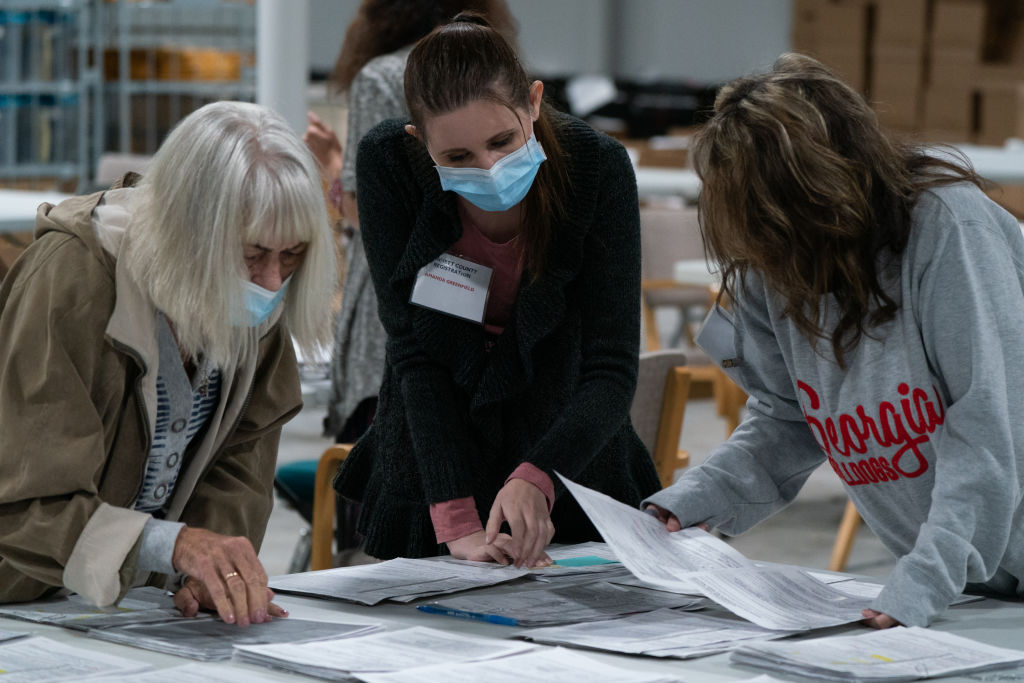 One Georgia county took the extraordinary step of matching the signatures of absentee ballot envelopes to the official ballots inside, a move that President Donald Trump has baselessly claimed would prove he won the state, and found that the elections staff had 99.99% accuracy rate and zero fraudulent votes had been cast.

On Tuesday evening, Atlanta Journal-Constitution reporter Greg Bluestein reported that Cobb County, a suburban collar county northwest of Atlanta, had finished an audit of 10 percent of the more than 150,000 absentee ballots cast in the 2020 general election. And Georgia Secretary of State Brad Raffensperger again pointed out that the results, like the previous statewide recounts, confirmed that their was no widespread fraud and that President-elect Joe Biden was the certified winner of the state.

“The Secretary of State’s office has always been focused on calling balls and strikes in elections and, in this case, three strikes and you’re out,” Raffensperger said. “We conducted a statewide hand recount that reaffirmed the initial tally, and a machine recount at the request of the Trump campaign that also reaffirmed the original tally. This audit disproves the only credible allegations the Trump campaign had against the strength of Georgia’s signature match processes.”

To conduct the signature match audit, county election officials, under supervision by the state, pulled ballots randomly from 30 boxes that had been secured in country facilities since the election. As a result of the nearly two-week-long audit, Cobb County found only two votes out of more than 15,000 should’ve been flagged for “cure notification.” One of the pair was mistakenly signed by a voter’s spouse on the envelope, but the correct voter signed the ballot inside, and the other had not been signed on the envelope, but the actual ballot was likewise properly signed.

These results, while unsurprising after the unprecedented scrutiny Georgia’s voting process has received, nonetheless deal yet another hammer blow to the deranged conspiracy theories being pushed by Trump. At several points since the election was officially called for Biden, Trump has falsely claimed that a signature verification audit of the absentee envelopes and ballots in Georgia would reveal massive fraud and “flip” the state to red.

Thousands of uncounted votes discovered in Georgia counties. When the much more important signature match takes place, the State will flip Republican, and very quickly. Get it done! @BrianKempGA

The “Republican” Governor of Georgia, @BrianKempGA, and the Secretary of State, MUST immediately allow a signature verification match on the Presidential Election. If that happens, we quickly and easily win the State and importantly, pave the way for a big David and Kelly WIN!

Symbolic of how the president’s legal fight to overturn the results in Georgia has gone, pro-Trump legal surrogate Lin Wood filed a lawsuit in the state 10 days ago with an apparent typo that was signed “under plenty of perjury.”