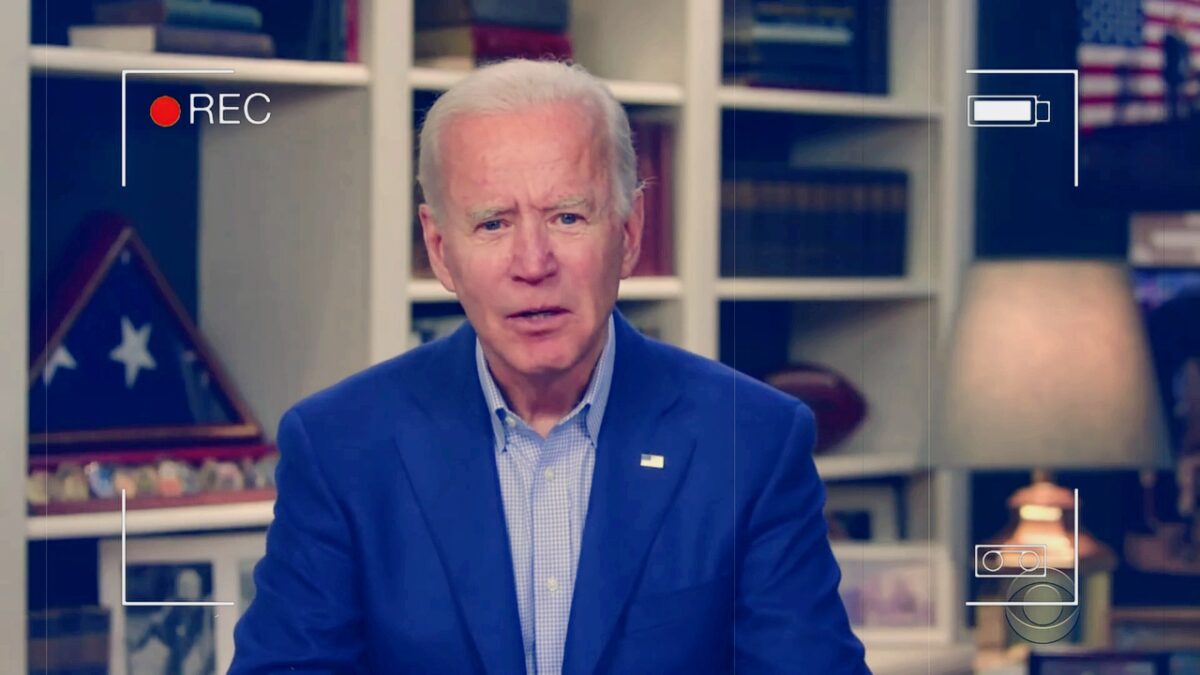 NBC News made waves with an anonymously-sourced report on President-elect Joe Biden’s thoughts about prosecuting President Donald Trump, but we’ve got videos that cover the same territory from a single named source: Joe Biden.

People all over the Resistance-sphere™ are spun up over that report, which is attributed to “five people familiar with the discussions,” and while it contains no direct quotes, the gist is that “Biden has raised concerns that investigations would further divide a country he is trying to unite and risk making every day of his presidency about Trump,” and one adviser says he “just wants to move on.”

But we’ve unearthed video of Biden discussing this very same subject, which means all of you are about to become “people familiar with the discussions” too.

During a virtual town hall conducted by Lawrence O’Donnell in May, Biden was asked by a voter “would you be willing to commit to not pulling the president forward and giving Donald Trump a pardon under the pretense of healing the nation? In other words, are you willing to commit to the American ideal that no one is above the law?”

“Absolutely yes. I commit,” Biden replied, and went on to make some key points when O’Donnell followed up by asking “you`re saying that wherever the investigative trail might lead, whether that be an investigative trail pursued by the Justice Department against Trump officials, Trump associates, administration officials, whether those are congressional investigations, that`s hands off for you? You`re not going to say, let`s just let bygones be bygones?”

Look, the attorney general is not the president`s lawyer. It`s the people`s lawyer. And you remember when you were there with Pat Moynihan. We never saw anything like the prostitution of that office like we see it today.

It is not something the president is entitled to do, to direct either a prosecution and/or decide to drop a case. That is not the president`s role, responsibility, and it`s a dereliction of his duty, and a dereliction of the duty as a — you know, you have what? Whether 2,000 was it or former attorneys general or people who worked in the office that said the present attorney general should resign.

What`s going on is an absolute travesty, a travesty of justice. That will not happen, I guarantee you.

He made similar points a few days later when Late Show host Stephen Colbert asked him a similar question, framed by President Barack Obama’s public statements about not going after Bush administration officials in 2009.

Biden has addressed this question on many occasions, but the most revealing was probably an exchange from the NABJ-NAHJ Presidential Forum in August, during which Lulu Garcia-Navarro asked him “Should you win, would you follow through on the many investigations, could you envision him, a former president, being prosecuted if the evidence shows wrongdoing?”

Biden reiterated his earlier statements about the DOJ’s independence, and said “I will not interfere with the Justice Department’s judgment of whether or not they think they should pursue the prosecution of anyone that they think has violated the law.”

“Including a former president?” Garcia-Navarro asked.

“But if it shows that there was wrongdoing, you believe that a president could actually be prosecuted?” Garcia-Navarro asked.

“I don’t think anyone’s above the law,” Biden said, and in a revealing aside, added “And I love the way you’re trying to get me into this thing about ‘Lock him up,’ you know, I’m not going there.”

The latter clip features Biden’s most candid commentary on the subject to date, and should inform how we evaluate this NBC News report.

The fears of people like Cenk Uygur and Keith Olbermann are well-founded, but there are some key differences between Biden and Obama. President Obama made his comments in public, and his argument has been oversimplified over time. Whatever you think of it, the merits were completely different.

Based on his public statements, Biden’s chief concern appears to be getting roped into, as he put it, a “Lock him up” kind of thing, which would be an attractive bit of payback for the resistance crowd — and, I think many would agree, a warranted one — but would also be an abuse of power and an impropriety that would ironically damage any effort to bring Trump and his minions to justice.

But the president-elect also has a sincere belief that even the appearance of a politically-motivated prosecution would not be, as he put it, “good for democracy.” This was not a practiced and workshopped response.  In order to protect the principles that Trump shredded, the bar for independence and the merits of any prosecution needs to be above reproach.

That leaves open a very important question: What was the purpose of this story?

Based on the attribution, this absolutely appears to be a legit messaging effort from legit sources. The obvious conclusion to be drawn from this is that Team Biden is trying to soften the ground for Biden to lEt tRuMp gEt aWaY WiTh iT!, and that’s certainly a possibility. (It could also be a trial balloon, but it would be the most unnecessary such balloon in meteorological history. Politically speaking, the wind direction on this is pretty clear.)

But to what end? Any sincere effort at building or judging political cover for a step away from exacting justice from Trump would mire wisely and effectively be conducted in public, by surrogates. There are plenty of Third Way types in the Bidenworld Rolodex.

The tell here is that the substance of the reporting is all consistent with Biden’s public statements, there are no direct quotes, and the messaging is only attributed to the unnamed advisers. This article is directed at two similar audiences.

For supporters of Trump who might be propelled into a variety of unhelpful actions — from interfering with vote certifications to flooding the Georgia Senate runoff with cash and votes — the message is that they don’t need to fear Biden making a martyr of their guy. There’s no reason to get energized like they did on Election Day, or a least there’s one less reason.

But more importantly, Biden’s other audience is one Donald J. Trump who, for the next two months, will be the equivalent of a cornered rat who’s in charge of an entire country. And his administration is a cadre of less-powerful but equally cornered rats. The less concerned they all are about being hauled away like Jerry Lundegaard at the end of Fargo, the better it is for everyone.

It’s also possible that all of these things are true, and Biden genuinely is “wary” of pursuing investigations, but that’s close to irrelevant. As Biden’s multitudinous public comments make clear, it’s not up to him, and it shouldn’t be. Trump and his henchpeople will face a raft of independent law enforcement agencies, a Democratic majority in the House, and if enough Trump supporters can be lulled into despondent inaction in January, a Democratic Senate with a tie-breaking powerhouse named Vice President Kamala Harris calling the shots.