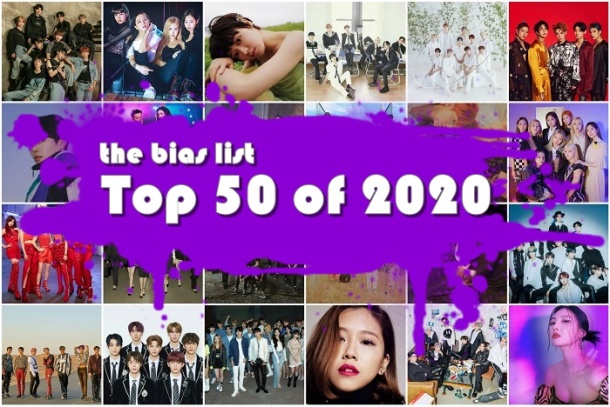 The end of the year countdowns are finally here! As always, we’ll kick off with the big one: The Bias List’s top 50 songs of the year! Each day this week, I’ll be counting down ten of the year’s best, until number one is revealed on Friday.

Curious about last year’s countdown? Check out the masterpost here!

While most acts tackled a narrow pool of genres this year, Woodz’s Bump Bump delivered a blast of punky pop rock. Harnessing some of the same charismatic delivery that made G-Dragon a star, he more than proved his versatility as a songwriter. (full review)

There will be many retro synth-pop tracks on this year’s countdown, but SoRi deserves a nod for the catchy Initial S, which leverages an addictive instrumental loop to create a song that feels at once familiar and fresh. (full review)

BDC’s Shoot the Moon is mostly ‘K-pop boy group by-the-numbers,’ yet when that majestic synth hook takes over, the track gains new life. But the rest of Moon proved to be a real grower on its own, tying together a series of catchy turns. (full review)

ONEWE like to play with genre, and End Of Spring injected their core rock sound with festival-ready EDM. The result is a joyful sendoff to the spring season, buoyed by an effusive instrumental hook. The “rock” version is even better! (full review)

Some songs are instant hits, while others take time to unveil their charms. MCND’s Ice Age is brash and noisy, but what first felt obnoxious soon grew into an obnoxiously wonderful rallying cry. Never mind the fact that the song is as silly as can be. (full review)

45. Golden Child – Without You

While not as uplifting or intense as their other 2020 title tracks, Without You’s sparse arrangement and looping hook shown great spotlight on Golden Child’s vocals. It’s dynamic in its own way, growing from a hush to an anguished cry with undeniable flair. (full review)

NCT’s 2020 releases were a mixed bag, but Dream remains the Korean unit to beat. Ridin’ harnesses some classic SM sounds and fuses them to an off-kilter chorus that climaxes in a mighty vocal flourish. (full review)

In a just world, Lalalilala should have been April’s big breakthrough. It takes so much of what’s great about their sound and ups the intensity, highlighted by a swirling, strings-assisted chorus that feels like a not-so-distant cousin to the work of groups like WJSN and Oh My Girl. (full review)

Though not as well known as many acts on this countdown, IMFACT have a history of delivering the goods. Lie is no different, hinging on the group’s emotive delivery and a driving dance beat that surges in all the right places. (full review)

OnlyOneOf’s Angel is the breezy summer smash that never was, grooving on an addictive instrumental that’s complimented by the group’s airy vocal. This is the kind of earworm that sticks around for much longer than expected. (full review)