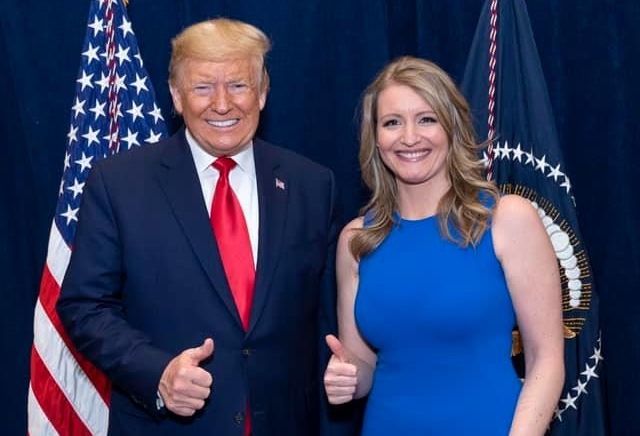 President Donald Trump’s senior legal adviser and campaign lawyer Jenna Ellis‘ Facebook page loudly proclaims that she is “Proud to work for America’s best POTUS and Keep America Great!” but in 2015 and 2016, she was singing a very different tune, according to a new report by CNN’s KFile by Andrew Kaczynski, Em Steck, and Nathan McDermott.

Ellis has made a brand for herself as one of the president’s most vocal propagandists, making frequent media appearances to defend Trump administration policies and then this past year, the campaign as well. She’s tangled with everyone from HBO’s Bill Maher, CNN’s Brian Stelter, and even Mediaite founder Dan Abrams. She’s promoted Trump’s unfounded claims of voter fraud, scolded reporters who were mean to him as “POC liberal women” asking “stupid questions,” and once drew a rebuke from Marge Simpson after a petty insult about Vice President-elect Kamala Harris.

But just a few years ago, Ellis would have been furiously nodding along with Trump’s critics, based on her own numerous social media posts and several radio interviews where she absolutely excoriated then-candidate Trump.

Among the comments that the KFile team uncovered were a March 2016 Facebook post where Ellis called Trump’s values “not American” and linked to a post calling him an “American fascist,” and another that same month where she attacked Trump’s supporters as being so willing to support an “unethical, corrupt, lying, criminal, dirtbag” — and then yet another that same month where she really railed against them for making “ridiculously illogical, inconsistent, and blatantly stupid arguments supporting Trump.”

“But here’s the thing: his supporters DON’T CARE about facts or logic,” Ellis wrote. “They aren’t seeking truth. Trump probably could shoot someone in the middle of NYC and not lose support. And this is the cumulative reason why this nation is in such terrible shape: We don’t have truth seekers; we have narcissists.”

Ellis also wrote several posts and made comments on radio interviews saying that Trump should not be considered a Christian because he refused to seek forgiveness or repentance, and shared other posts calling him “abusive” and “unholy.”

When CNN reached out to Ellis for comment about these past remarks, she replied that it was “no secret” that she hadn’t supported Trump during the 2016 primary process but was “glad to have learned that I was completely wrong about Trump back then” and had changed her mind after getting to know him.

“President Trump is a sincere Christian, the best president in modern history, and made and kept his promises to the American people,” said Ellis.

In the 1962 film The Manchurian Candidate (no spoiler alert needed for a movie that’s been out for nearly sixty years), American soldiers are brainwashed by communists to cover up a war crime committed by a sleeper agent. When asked about the unwitting sleeper agent’s (he’s been brainwashed too — the plot is a magnificent Russian nesting doll of schemes) character, they automatically reply, “Raymond Shaw is the kindest, bravest, warmest, most wonderful human being I’ve ever known in my life.”

Now, no rational person would claim that Ellis has been brainwashed by communists. That would be completely ludicrous, but also ludicrous is pretending there is no logical conflict between Ellis’ words in 2015 and 2016 and her words in 2019 and 2020.

Then: she criticized Trump for claiming to be Christian but refusing to seek forgiveness or repentance, core tenets of the faith. That criticism was a response to Trump’s own words on the issue, and he has never recanted them. Now: Ellis says he is a “sincere Christian.”

Then: she sharply criticized virtually every aspect of his character — or lack thereof. Now: she praises him as the “best president in modern history,” while promoting his baseless claims of election fraud and defending his unconscionable refusal to cooperate with President-elect Joe Biden’s transition team.

With a quarter of a million Americans dead from Covid-19, and cases surging to horrific record levels, Trump’s selfish recalcitrance on just this one issue alone should disqualify him from any aspirations to be called our “best president” by anyone other than a sycophant or a fool.

Ms. Ellis, you were right the first time around, before you were on the president’s payroll.