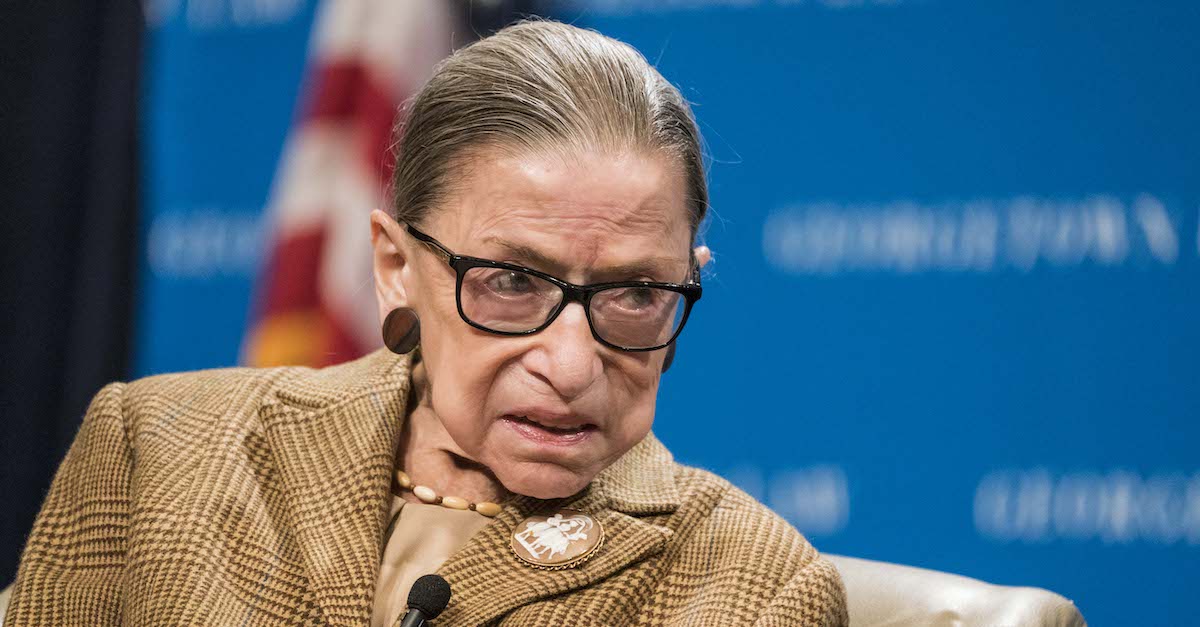 Attorneys for President Donald Trump are relying on a dissent by the late Ruth Bader Ginsburg in an attempt to use the judiciary to win the 2020 presidential election in Wisconsin. They’re also relying on a missive penned by Laurence Tribe, the Harvard Law professor emeritus who argued vehemently in favor of Trump’s impeachment and who has otherwise been deeply critical of the president.

In a Dec. 16 brief before the federal U.S. Court of Appeals for the Seventh Circuit, Trump’s attorneys asked the judges to declare that state and local Wisconsin officials conducted the election in violation of both state statutes and the U.S. Constitution and to issue an injunction allowing the Republican-controlled state legislature to select its own electors.

Ginsburg’s dissent in Bush v. Gore contains critical language for Team Trump. To understand the issue, we must begin with a recap of that two-decade-old case. The 2000 election which landed before the Supreme Court resulted in two core rulings. First, the Supreme Court held 7-2 that Florida’s recount violated the Equal Protection Clause because the Florida Supreme Court and various other state entities issued edicts which resulted in highly disparate methods of recounting votes.  Second, the Supreme Court held 5-4 that no constitutionally sufficient recount could be fashioned within an appropriate time. That is because Florida’s legislature wished to comply with the so-called “safe harbor” deadline contained within 3 U.S.C. § 5. Under that federal statute, if a state makes a “final determination” on any election “controversy or contest” at least six days before its electors meet, then that state’s determination of the election “shall be conclusive” and (mostly) cannot be second-guessed by Congress.

Bush v. Gore was argued Dec. 11, 2000, and was decided Dec. 12. The “safe harbor” date in 2000 was Dec. 12. Thus, the majority ruled that no constitutionally sufficient recount remedy could be fashioned by the date the Supreme Court decided the case. The upshot was a shutdown of the Florida recount and the determination of George W. Bush as the winner in that state.

Justice Ginsburg dissented with both majority holdings. At its core, Ginsburg’s dissent argued that the state courts were correct by allowing a recount to continue and that there was plenty of time to fashion an appropriate remedy for what many believed to be a botched count of votes. As to the timing, Ginsburg argued that the dates considered critical by the majority, including the so-called “safe harbor” date, weren’t that important (some punctuation omitted):

[T]he December 12 date for bringing Florida’s electoral votes into 3 U. S. C. § 5‘s safe harbor lacks the significance the Court assigns it. Were that date to pass, Florida would still be entitled to deliver electoral votes Congress must count unless both Houses find that the votes “had not been . . . regularly given.” 3 U. S. C. § 15. The statute identifies other significant dates. See, e. g., § 7 (specifying December 18 as the date electors “shall meet and give their votes”); § 12 (specifying “the fourth Wednesday in December” — this year, December 27 — as the date on which Congress, if it has not received a State’s electoral votes, shall request the state secretary of state to send a certified return immediately). But none of these dates has ultimate significance in light of Congress’ detailed provisions for determining, on “the sixth day of January,” the validity of electoral votes. § 15.

And that’s the key dissent to which Trump’s lawyers have attached. The key date, they argue, is Jan. 6th, as Justice Ginsburg pointed out — not the 2020 “safe harbor” date of Dec. 8th. Here’s how Trump’s team in its recent motion before the Seventh Circuit quoted Justice Ginsburg and Harvard Law Prof. Tribe (again, some internal punctuation omitted):

Some of these Team Trump arguments flowed from similar admissions by the Wisconsin Elections Commission that Jan. 6th is, indeed, the most important date for the selection of the next president. The Trump-appointed district judge who jettisoned Trump’s case on the merits agreed:

The final determination of the next President and Vice President of the United States . . . is not necessarily dispositive on a state’s electoral votes. See Bush v. Gore, 531 U.S. 98, 144 (2000) (Ginsburg J., dissenting) (noting none of the various Florida elector deadlines “has ultimate significance in light of Congress’ detailed provisions for determining, on ‘the sixth day of January,’ the validity of electoral votes”).

Bottom line: everyone admits that Jan. 6th is the key date for the finalization of the election. That’s black-and-white statutory law. But it’s Team Trump — not the others — which argues that changes can be made by the courts leading up to that date and after the “safe harbor” date. The majority in Bush v. Gore disagreed.

As such, Team Trump is picking and choosing which sections of Bush v. Gore it likes and which sections it dislikes. The majority of justices in Bush v. Gore stood for the proposition that states should be allowed to meet their “safe harbor” deadlines. Trump’s attorneys are now pushing for the opposite — despite favorably citing Bush v. Gore to back up their argument that state and local officials should not be allowed to meddle with a state legislature’s statutory decrees about how an election should and should not procedurally play out.

Read the Trump attorneys’ arguments below: