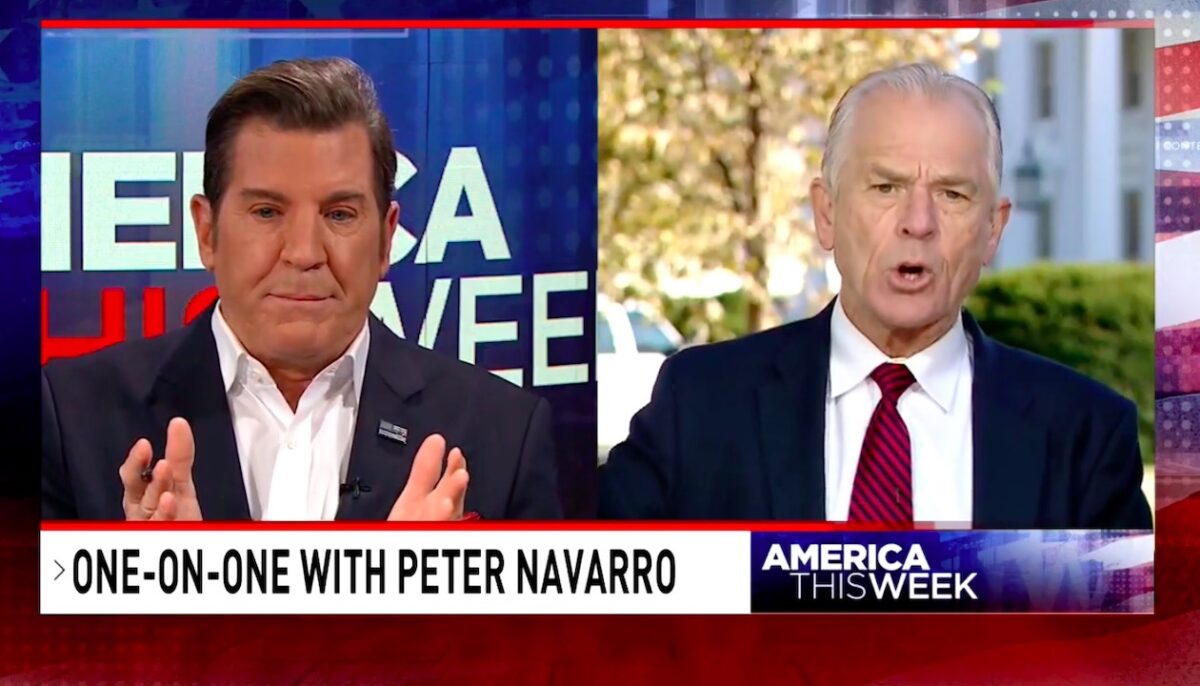 White House trade advisor Peter Navarro went full tinfoil hat in an interview on Eric Bolling’s show, America This Week, making several bizarre, baseless accusations, among them that China had sent “hundreds of thousands of Chinese nationals” around the world to “seed” the virus into a pandemic.

Bolling launched the interview asking Navarro what kind of relationship he thought a Biden administration might have with China — with, of course, Bolling first making sure to clarify that he was not “getting into” whether or not Joe Biden was the “president-elect,” because that’s the stupid place that President Donald Trump’s recalcitrant refusal to acknowledge the very basic math that has Biden with an insurmountable vote lead has left the president’s diehard supporters.

“Well, President Trump’s going to get a second term,” Navarro began, clinging steadfast to his sycophancy, before launching into a diatribe about how Trump was the “only person in the deep swamp here” who was willing to “stand up to communist China” and Biden was “totally compromised.”

“Every time I wake up in the morning and see the cases surging, I think, why the hell aren’t people more angry at communist China for infecting us with this virus?” Navarro asked. “They are killing people here, and yet we see the mainstream media just won’t go there, we see the Democrat Party won’t go there.”

“Let’s go ahead and blame the entity that’s really responsible for this pandemic, the Chinese Communist Party,” Navarro continued. “People are dying because of them.”

“It was spawned in November in China,” replied Navarro, pushing a completely unproven claim, “most likely in one of their bioweapons labs, we don’t know if it escaped intentionally or not, but that doesn’t matter. What matters, Eric, is that they hid it for 60 days. During that time, they locked down their entire country because they knew it was dangerous, didn’t want their own people infected, and they sent hundreds of thousands of Chinese nationals around the world on gleaming aircraft to go and seed that virus —”

“Nobody disagrees with that fact, Eric,” Navarro shot back.

Many people do, in fact, disagree with almost all of what Navarro was saying.

“That is a fact,” Navarro continued, becoming incensed and gesturing emphatically all while not providing an iota of evidence to back up this conspiracy theory.

“I’m asking you, because, this is, we need to understand, differentiate, ‘sent people to seed the virus,’ versus allowing people to travel, that’s a very big distinction there,” Bolling said.

“I think we need to get to the bottom of it, Eric, but we do know this as a fact,” Navarro insisted, still not providing any proof Chinese Communists intentionally deployed infected individuals as part of a global biological warfare attack. “They sent hundreds of thousands of people around the world, free to travel, even as they were locking down their own country.”

“The Chinese Communist Party knew that was a deadly virus that could kill people, and they didn’t want their own people killed, but they didn’t give a hell about killing the rest of the world.”

Bolling repeatedly attempted to derail Navarro’s rant, going back to the difference between not halting all travel and deliberately sending out infected people to spread the virus.

“Now you tell me,” an insistent Navarro continued, “it’s either negligent homicide or premeditated murder or something in between.”

Bolling seized on that, saying that allowing people to travel would be considered “negligent homicide, in some places,” and “if you instructed them to, that would be homicidal.” Note, neither Bolling nor Navarro are attorneys.