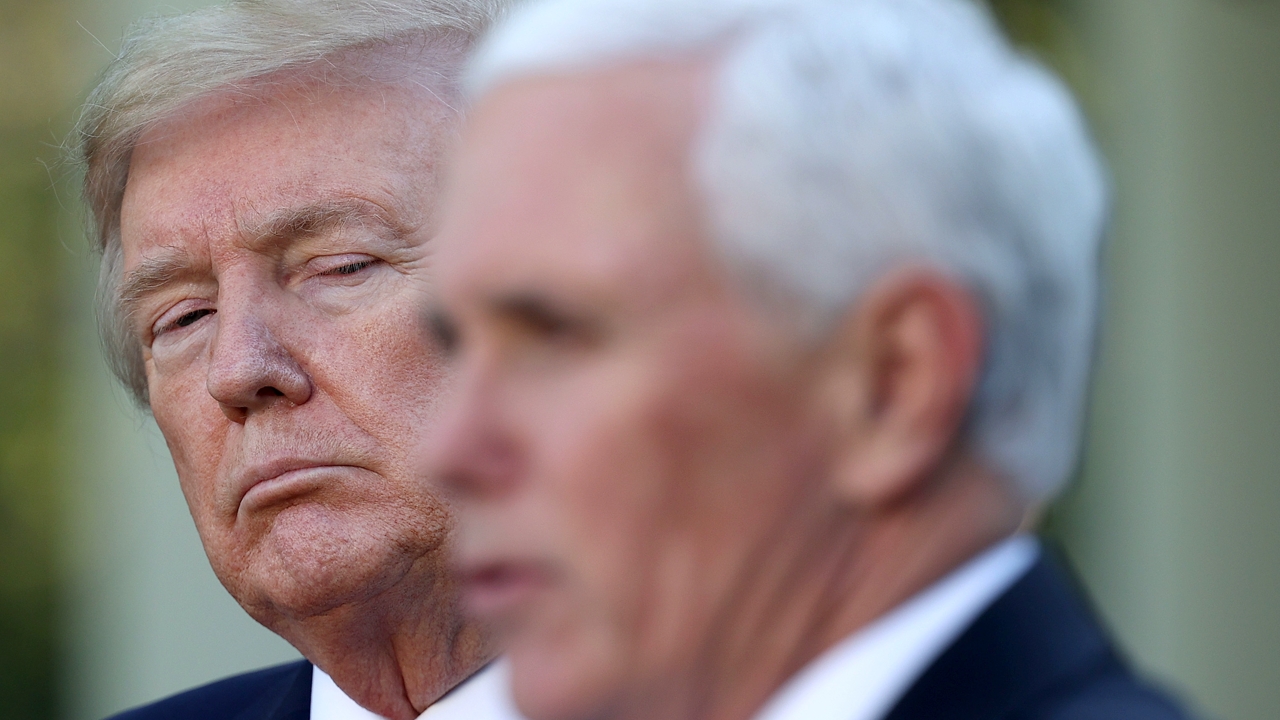 After four years of unwavering devotion to President Donald Trump, Vice President Mike Pence might find himself “under the bus” if he ignores pressure from the president to “reject” the Electoral College vote.

“The Vice President has the power to reject fraudulently chosen electors,” Trump wrote in an entirely false Tuesday tweet.

The Vice President has the power to reject fraudulently chosen electors.

Pence’s only role during the electoral-vote count on Jan. 6 is to open certificates from each state and announce the winning Electoral College slates, which were already certified by each state’s executive official.

If Pence does decide to continue backing Trump, regardless of the Constitution, and announces the results of the “alternate slate of electors” as oppose to the Electoral College’s, Congress still has the power to overrule him.

Trump’s tweet followed a similar threat he made to Pence during his speech at a Georgia senate campaign rally on Monday.

Amused by the idea that Pence could become Trump’s latest enemy after four years of devotion, pundits took to Twitter to react to the news:

Pence has displayed absolute deference to Trump since 2016, complete supplication, and his reward will be that Trump turns him into an enemy of MAGA based on election lies and complete ignorance of the VP’s powers. https://t.co/UfE7uOB0Ks

Pence spent 4+ years as quietly loyal as possible. As of now, 90% of his obituary will be about his role helping Trump. And he’s about to get thrown under the bus on a whim because of something the president heard on the internet. https://t.co/WBPh7kWw1z

The Pence situation reminds me of this poem about a snake….

Pence, after 4 years of dodging Trump’s public insults/getting on his bad side, is going to get the ultimate lashing on his way out. His craven compromise to choose working for DJT isn’t even going to pay off because the Trump base will hate him after he doesn’t “veto.”

Trump has done this repeatedly. He keeps pretending random Republican officials have the power to unilaterally overturn election for him (= steal) and then attacks those officials when they don’t do it. Now Pence will be the bad guy for not doing something he has no power to do.

When Pence reads out the votes as cast by the states, there are going to be a lot of Trump voters who feel he betrayed them. That’s not a great development for his future presidential ambitions.

Sounds like Pence is going to go through some things.

Others focused less on Trump’s attempts to publicly coerce Pence, instead emphasizing the “absurd and incredibly dangerous” nature of the false statement:

First of all, you’re a liar, the VP role is to count the votes. Second, there were no fraudulently chosen electors. Third, stop this madness. It’s pathetic and disgusting. #VoteWarnockOssoffToday

.@realDonaldTrump would you just stop with this crap. You know damn well @VP only has the power to count votes already confirmed by the electoral college. YOU LOST. That’s what happens when YOU LOSE. Pence ain’t changing that. Here, read the #12thAmendment https://t.co/1FLC6ZpHIT https://t.co/MbmkX8hF3X

Pence can reject valid electors? That would be news to the designers of the constitution, the Vice President and the states that verified their election outcome. It would also be the most blatant attempt to steal the election in US history.

Trump whining on twitter that Pence must unilaterally crown him king is yet another illustrative combination of Trump’s authoritarian aspirations and slapstick incompetence.

What Trump says below is, of course, not true.

The ‘power’ he’s describing has never been used by any VP in American history.

This is absurd and incredibly dangerous https://t.co/3rWSeZuuOi

I don’t know why this is so funny to me, it’s like when you’re playing Monopoly with a little kid and they’re losing so they start breathlessly making up rules like “Actually if you land on that it doesn’t count if you’re the steamboat” 😂 https://t.co/724H4w06Yr

That was the argument of Rep. Louie Gohmert’s lawsuit that was dismissed by a federal court on Friday https://t.co/wI6OSMCL0t

Narrator: He does not have any such power. https://t.co/WOAocqpU3U