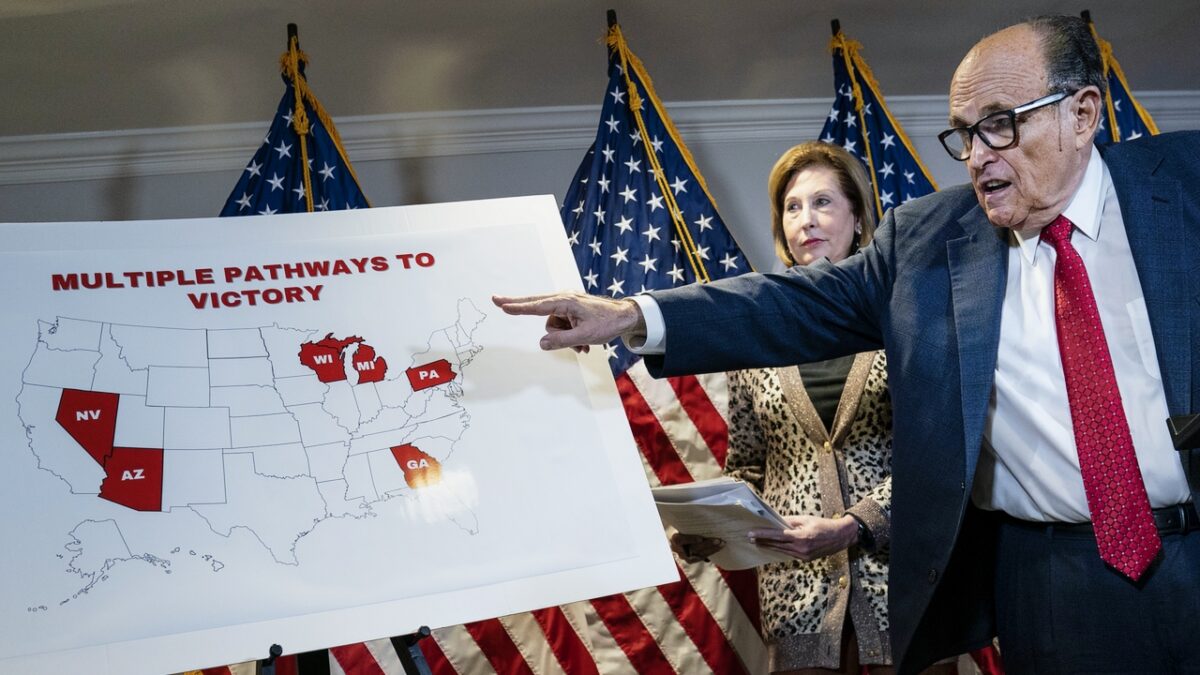 At one point Giuliani acted out a scene from the ’90s comedy classic My Cousin Vinny, and even had a mysterious black liquid streaming down his face for a large portion of the press conference.

As if Giuliani didn’t give the internet enough to talk about, Powell, known for representing Michael Flynn before Trump, almost instantly began pushing conspiracy theories while speaking to reporters.

She claimed that the only reason President-elect Joe Biden won the election was due to “massive influence of communist money through Venezuela, Cuba, and likely China,” adding that voting systems like Dominion “were created in Venezuela at the direction of Hugo Chavez.”

Powell also insinuated that Chavez, who died seven years ago, conducted a scheme against the 2020 Election, even citing witnesses.

Unable to control themselves while watching the truly bonkers press conference, journalists and pundits — from both sides of the political aisle — erupted on Twitter to call out the absurdity:

This is next-level crazy. https://t.co/JhS7Z7xXSr

Rudy Giuliani used My Cousin Vinny to defend the President of the United States, Donald Trump.

Sorry to have slighted you, Mad Libs of 1994

Free headline for use: Giuliani was so full of shit in his press conference that brown stuff streamed down his face

Rudy Giuliani is the Republican Party: a sweaty, leaking, once-respected dinosaur now completely dying on the stupidest hill that is Donald Trump.

I mean, I mock stuff all the time, I’m sure I sound like a hypocrite. If he’s being ridiculous, treat him as ridiculous! But also, what he’s trying is dead serious. I just don’t think we should be all “They don’t give a Nobel Prize for Attempted Chemistry!” about this

The Rudy news conference claims Georgia’s votes are counted in a server overseas. This is false. The paper ballots were just counted again by hand in GA counties, which would have revealed any vast discrepancies between the electronic/machine count and the actual ballots.

“Clearly you’ve never been court reporters,” Jenna Ellis lectures (can I raise my hand here and say I have been?)

Well, that easily was the most outlandish press conference ever held by a team of lawyers representing the President of the United States

why are you subjecting me to this

Actual description of the Rudy/Powell/Ellis team by Ellis: “This is an elite strikeforce team that is working on behalf of the President and the campaign to make sure that our Constitution is protected.”

“My Cousin Vinny,” is about a personal injury lawyer from Brooklyn who cons a judge into letting him try a case by impersonating someone else, so this tracks. https://t.co/vW9PcNHHgS

Fox News is still covering this farce live, because it’s a propaganda network.

Rudy Giuliani is lying: “they held the vote back in Palm Beach County & Broward County in order to see if they could steal that election for the Senate & Governor, and then caught manufacturing ballots.”