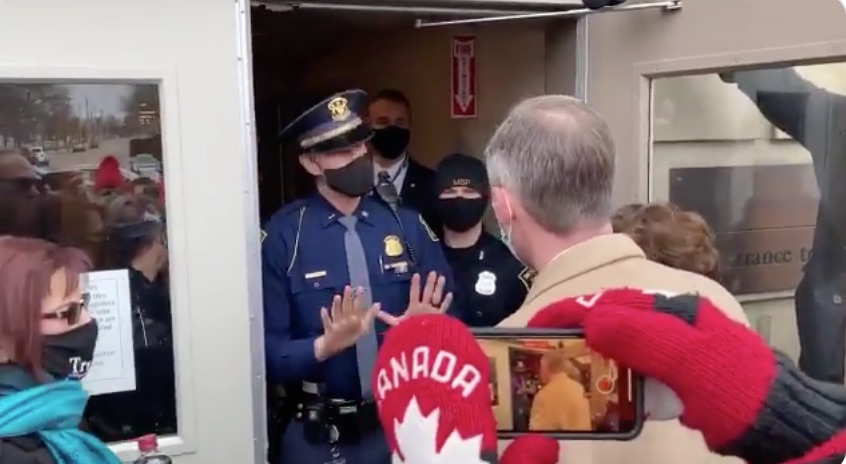 Republican slates of electors in a number of key swing states went through the motions of pretending their endorsement of President Donald Trump will matter, even though President-elect Joe Biden won their states and the official electors all voted for him on Monday.

In many of the battleground states that the Trump campaign has fruitlessly raised legal challenges about widespread election fraud, which lacks any evidence whatsoever, state Republican officials have convened to cast their “vote” for the Electoral College. In Georgia, Nevada, Arizona, and Pennsylvania, Republican convened outside their respective state capitols in a kind of phony, protest display of solidarity with Trump, who has likewise refused to accept the reality that he lost the 2020 election.

Several of these GOP slates even pushed the delusional theory that they would be sending their “dueling” electors to Washington, D.C., where Congress would certify their votes for Trump (instead of Biden’s official slates) on January 6, but that is totally false. The Constitution has no provision for weighing an alternative set of electors. Biden officially won all the swing states protesting as well as the Electoral College on Monday evening, 306 – 232.

In Michigan, where the state capitol was locked down due to threats of violence from angry Trump supporters, this theater of the absurd reached its peak on Monday afternoon. That’s when the GOP electors showed up at the capitol door seeking to enter and, thus, “vote” for Trump, but were turned away by the Michigan state police.

The Washington correspond for the Detroit News, Riley Beggin, captured the moment and posted the video online.

They said that they were the Republican electors there to cast their vote for president. State police declined to let them enter the building or leave votes offered in a manila envelope pic.twitter.com/rNVIwc5ZXC

In Nevada, the six Republican electors met outside for the exercise in Electoral College cosplay.

Their playacting quickly went viral thanks to actor, Antonio Sabato Jr., tweeting out the moment with an authoritative “BREAKING” leader, even though their votes did not officially count in any way.

#Breaking Georgia Republicans are meeting at the Cap to select their own slate of Trump electors to send to Washington even as Georgia Democrats are meeting to send the official slate of Biden electors to Congress. pic.twitter.com/TJZGjcJS57

As did the 11 GOP electors in Arizona.

Pennsylvania Republicans joined in on the Kabuki theater too.

All these anti-democratic acts of sore loserdom got a sympathetic shot in the arm from the official Texas slate of electors that overwhelmingly — but not unanimously — registered a meaningless “vote” in support of the dueling electors gambit.

New: Texas electors vote 34-4 to call on Legislatures in Pennsylvania, Georgia, Michigan and Wisconsin — whose election results handed the White House @JoeBiden — to appoint their own electors.

Pennsylvania Lt. Gov. John Fetterman, treating the resolution with as much seriousness as it merited, fired back at the idea on Twitter with two replies heavy on the sarcasm — and NFL trash talk.

We’ll get right on that

Moreover, they must acknowledge how much the Cowboys blow

Just another in the final few days in President Trump’s America.