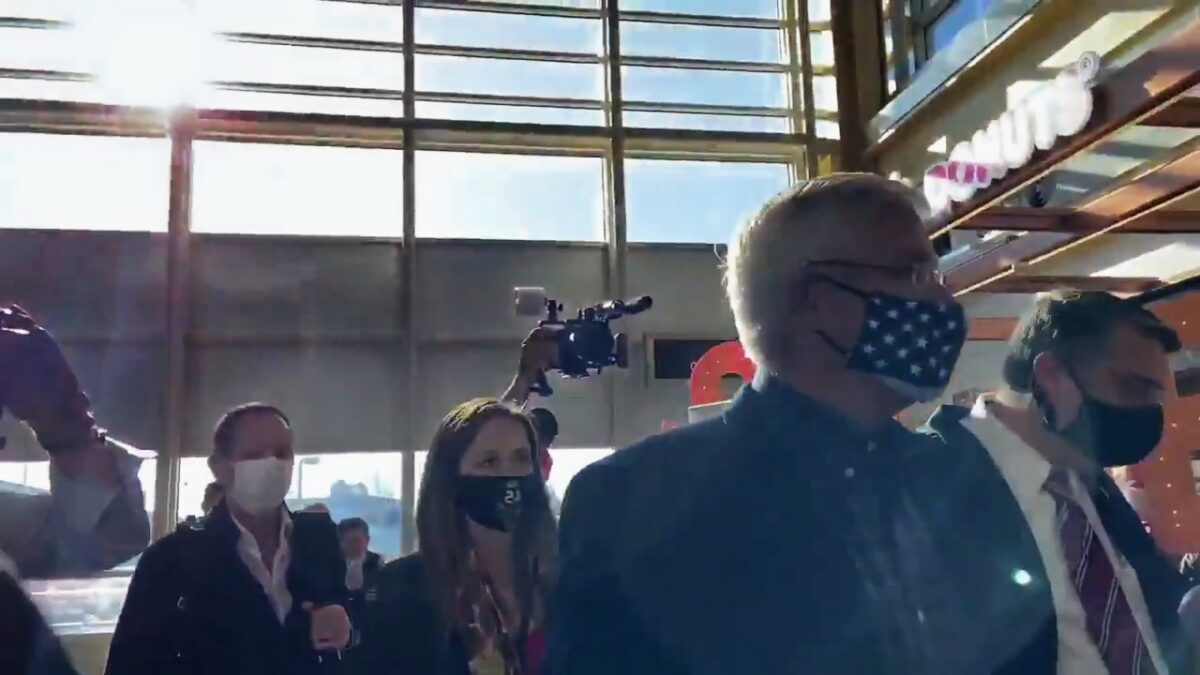 Michigan State Senate Majority Leader Mike Shirkey was mobbed by protesters as he traveled to a meeting with President Donald Trump over the results of that state’s election — which President-elect Joe Biden won.

The president-elect was declared the winner in Michigan by multiple news outlets the day after the election, but an intense effort to overturn that result exploded this week when a pair of local GOP officials initially refused to certify the votes in Wayne County, then relented, then got a call from Trump, then tried to rescind that certification.

In the meantime, Trump has invited Shirkey and Republican speaker of the Michigan House Lee Chatfield to the White House for a chat. But on his way through the airport Friday morning, Shirkey was greeted by protesters shouting “Protect our votes!”

Protesters shout “Protect Our Votes” to Senator Mike Shirkey (Michigan republican) on his way to Washington DC to meet with Trump. #Resisters pic.twitter.com/P44bnw2b1q

Michigan GOP Senate Majority Leader Mike Shirkey was caught by activists at the airport this morning after he was invited to the White House by Trump pic.twitter.com/8cwc4JkYdd

Shirkey was similarly greeted upon his arrival in Washington, DC, along with a cadre of reporters:

.@SenMikeShirkey just arrived at Reagan Airport and was immediately surrounded by protestors chanting “Certify the results!” Shirkey and other Michigan GOP lawmakers are expected to meet with @realDonaldTrump today. pic.twitter.com/NWnKUiLsUO

Earlier this week, Shirkey indicated he would not overrule the results, in a local interview:

Conservative groups have also started phone and letter-writing campaigns in an attempt to persuade legislative Republicans to decide the election for Trump.

“That’s not going to happen,” Shirkey, R-Clarklake, said in a wide-ranging interview with Bridge Michigan. He noted state law awards electors to the winner of the state’s popular vote. And Biden won the state by more than 146,000 votes, according to unofficial results.

“We are going to follow the law and follow the process,” he said. “I do believe there’s reason to go slow and deliberate as we evaluate the allegations that have been raised.”

But as Trump’s Rudy Giuliani-led legal team has been demonstrating the past few days, hope springs eternal.